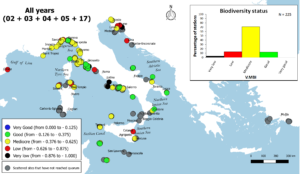 Between March to December 2017, 1385 questionnaires (which correspond to 1218 diving hours) were registered. Almost 50% of the survey questionnaires were registered by divers affiliated to our sponsoring agency PADI. The involvement of several diving centers suggests that this monitoring program could be used as a tool to enhance recreational diving, by encouraging people to dive and/or snorkel in order to collect data that will be used to verify the health status of the Mediterranean Sea. The geographical distribution of the surveys carried out covers a rather large area. 20 coastal regions bordering the Mediterranean were covered by surveys, 2 in Malta, 13 in Italy, 3 in Croatia, 2 in Turkey. In quantitative terms, the distribution obtained is rather patchy, for example, almost 33% of the registered questionnaires come from Tuscany alone. Thus, one of our goals for the coming years will be to homogenize the surveyed areas.

The most common depth range was between 0 and 20 m (86.9% of the survey stations had a mean survey depth within this range). The highest survey effort was in summer (74.1% of the survey stations were between June and September) and late morning (the mean survey time in 60.9% of the stations is between 10.00 and 13.00). This sampling distribution reflects the typical pattern of the usual touristic diving activity in the Mediterranean Sea. The first level of recreational diving licence allows a maximum depth of 18-20 metres. Divers prefer summer, when water temperature is higher, and the daytime, since night-dives requires particular devices and advanced training. The environmental distribution of the surveys carried out was not homogeneous, in fact the 87.7% of the registered records refers to the rocky environment, 7.8% to the sandy environment and 4.5% to other environments; as the surveys in the previous project. It was therefore not possible to make a comparative analysis of biodiversity related to the different marine environments.

This unevenness is certainly due to the divers’ preference for rocky bottom, which are nicer to visit since they have more species compared with sandy beds and are accessible also to less experienced divers compared to other dive sites/environment, such as wrecks or blue-dives.

The spatial comparison of the marine biodiversity index was made only for the rocky bottom environment, because sandy beds and the other environments have not reached a sufficient number of survey stations to allow a significant statistical elaboration. For the rocky bottom environment, a total of 24 survey stations were identified; we received questionnaires from other 156 dive sites but in the current analysis we could not classify them as survey stations given the limited number of completed questionnaires (less than 10). The marine biodiversity index was calculated for all the survey stations (2002-2005 and 2017); it was homogeneous among the five years and seemed to show a pattern on the spatial scale. One hundred and sixty-one stations (71.6%) had a “mediocre” marine biodiversity. Twenty-eight stations (12.4%) differed positively from the mean value showing a “good” marine biodiversity quality. The twenty-nine stations (12.9%) that differed negatively showed a “low” biodiversity and seven stations were “very low” (3.1%). Our results seem to confirm the significant negative correlation between environmental quality and latitude previously found in the “Divers for the Environment” project. This trend was supported by investigations performed by the Italian Ministry of the Environment in the same period of “Divers for the Environment”.

The preliminary data we obtained until now seem to indicate that the status of the Mediterranean Sea has not changed significantly compared to the status obtained 12 years ago through the “Divers for the Environment” project. However, we need to keep monitoring and protecting our sea, to avoid biodiversity loss in coming years as a result of anthropogenic pressures and climate change impacts.

If you are interested in all our results and discussion, you can download the short and full annual report below.